Published by Peter Collins on August 2, 2018 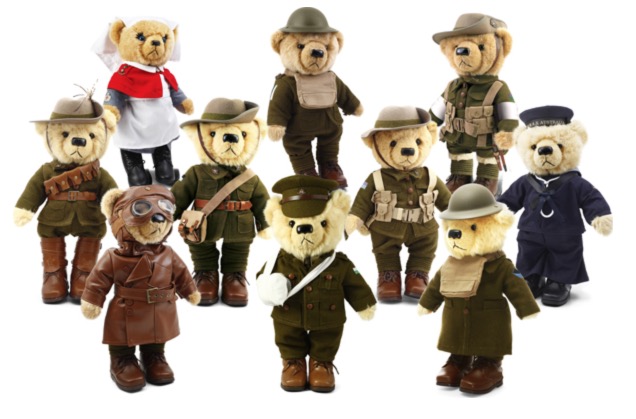 ABOVE: Fall in! The Bears for Schools initiative is coming your way.

Leading public figures and military charities are rallying around the Bears to School campaign as part of a national project of commemoration of Australia’s remarkable role in World War I.

According to a Media Release jointly issued today by Australia in the Great War (AGW), the National Returned and Services League (RSL) and the National Serviceman’s Association, the Bears to School initiative has the privilege of being spearheaded by Keith Payne VC AM, as its National Ambassador.

Mr Payne is Australia’s most decorated serviceman and oldest living recipient of the Victoria Cross, which he received for acts of extreme gallantry during the Vietnam War in 1969.

In a display of remarkable bipartisan political support, he has been joined by both the Prime Minister, Malcolm Turnbull MP, and the Leader of the Opposition, Bill Shorten MP, in endorsing Bears to School.

The initiative has also gained support from the private sector, including a champion for the preservation of Australian history and heritage, Kerry Stokes AC.

The Bears to School initiative aims to place historically accurate uniformed teddy bears into every primary school in Australia.

There are 12 bear characters available for donation to schools.

Each stands 40cm tall and wears an authentic uniform reflective of a particular service or campaign during the Great War of 1914-1918.

The initiative is relying on the Australian public, businesses, and organisations to donate a Great War-uniformed bear on www.AnzacBears.com.au to a primary school of their choice.

For $99.00, a Great War bear and support materials will be delivered directly to their nominated school.

The donor is acknowledged in a specially printed ‘story card’ that accompanies each bear and also receives a certificate of thanks and is recognised on the national website.

In recognition of this commendable undertaking, the Commonwealth Government has granted a rare dispensation for Bears to School to use the protected term “Anzac” in www.AnzacBears.com.au.

Once in their classrooms, these bears will serve as relatable and age-appropriate learning aids for teachers educating young students about Australia’s involvement in the Great War, our Anzac heritage, and the forthcoming Centenary of Armistice.

The bears are accompanied by specially developed learning resources, including information cards and audio recordings that can be used in the classroom or at home.

Bears to School has partnered with the Returned and Services League of Australia (RSL) and the National Servicemen’s Association of Australia (“Nashos”) to ensure that proceeds from the project will support local military and veterans’ charities.

Keith Payne’s enthusiasm for his role as Bears to School National Ambassador serves as an example of the project’s ethos: “I am proud to be part of an initiative that supports Australians in so many ways – supporting teachers and children in our primary schools, supporting ex-Service men and women, and supporting the preservation of our Anzac heritage”.

Many Australians have answered the Bears to School call, with more than 500 bears already donated to around 350 schools.